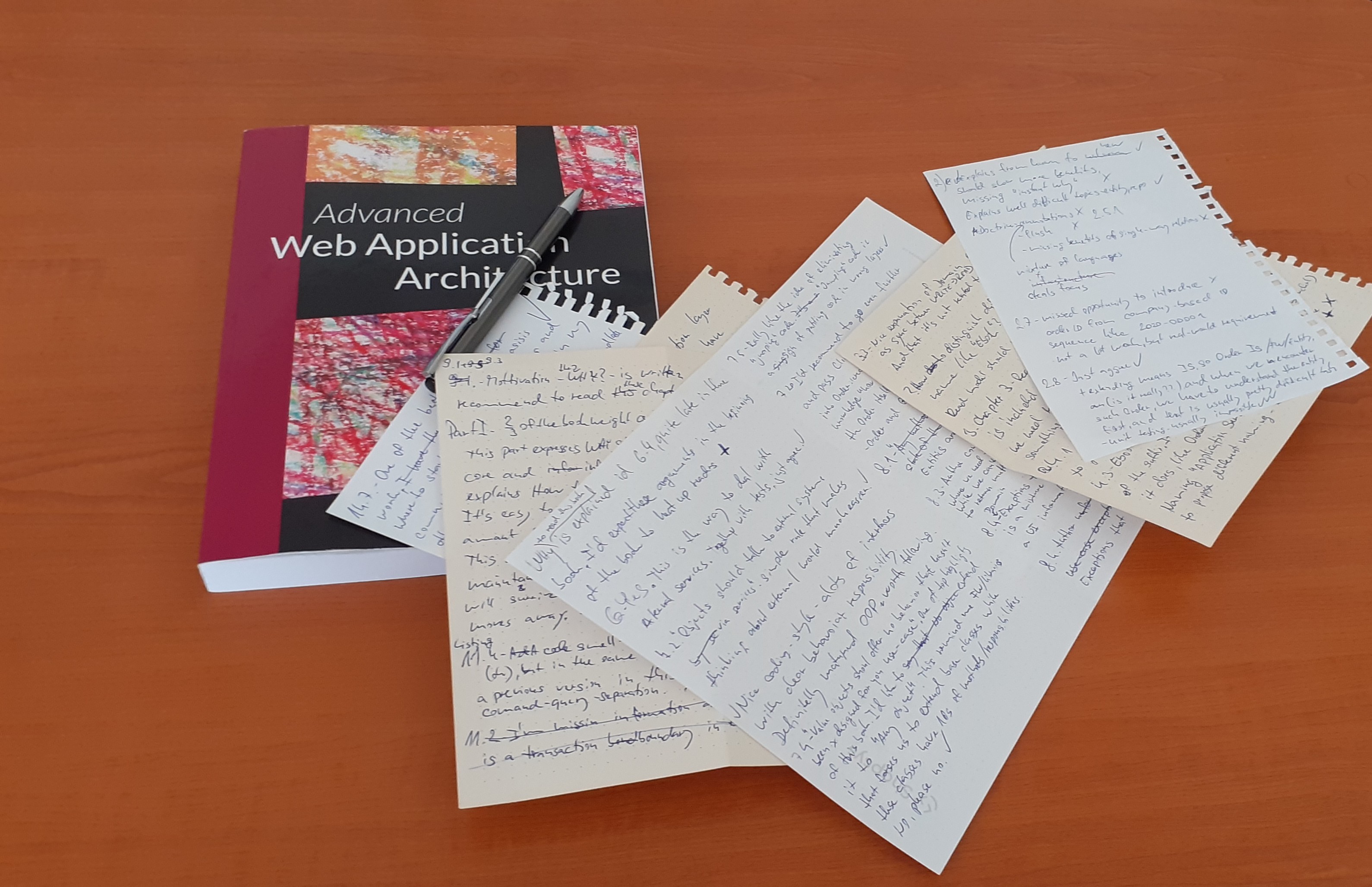 What is the Book About

Matthias shows how to focus on the business needs, on use cases and how to write it down into the code. He calls this code "core code". The core code is decoupled from databases, frameworks or libraries. This is the general idea of the book - isolate the code containing business logic.

Part I explain why should we focus on separating core code from surrounding infrastructure code and step by step shows how to achieve that. This separation leads to readable, maintainable, testable, extendable code that will survive at least years. Part I is also fairly unit tested and explains how to write proper - fast and meaningful - unit tests.

Part II puts concepts from Part I into context, this is actually the architecture part. Matthias explains here how to organize layers, what is hexagonal architecture and how to achieve it. One whole chapter is dedicated for testing - what tests write for what layer. Yes, there are plenty types of tests, not unit tests only.

The book is using easy English and anyone who can read this review can read the book. Matthias seamlessly leads reader from known but messy code to new well-structured approach. Difficult topics like entities, repositories, ports, adapters, ... are explained so easily that most of the readers will understand them immediately.

This is a book for programmers, about half of the book are code examples. Topics might be difficult to understand, but once we see the code in action, we immediately understand it.

Code examples speaks itself, the code is full of classes and interfaces with clear behavioral responsibility. Definitely matured OOP worth following.

The power of suggested architecture is that it leads to software that is clear, testable and maintainable. I just agree.

I surprisingly iterated over years to the same architecture. So this book unfortunately confirms my architecture style and next time I'll face such challenge I'll be more resistant to different approach/architecture.

I recommend reading this book to everyone who

If you aren't interested in application architecture much, but you somehow have a copy of the book in your hands than I strongly recommend reading chapters 9.1 and 9.3 first. Really, just these chapters and then continue from 1. I was missing a motivation, the why until these chapters, so don't worry and start with them.

Matthias doesn't use prefixes/suffixes in code examples like *Interface, and it makes me very satisfied.

The book has almost 400 pages, but I was able to read it fairy quickly due to easy english and enormous amount of code examples.

Ideas that Made My Day

I like most of the book, sometimes I disagree and sometimes I'm missing important information. You can find here couple of my notes and confront them with your point of view.

Including ORM mapping in the core code has disadvantages/problems

This technique has several disadvantages, for me the most important are

Matthias introduces read models and view models without any questions, and I like it. We need more view models and thinking that reading is very different from writing.

Matthias suggests to hide low level implementation like database queries behind abstractions. Sure, but why?

The reason for me is that high-level core code is easy to understand for new programmers (or for me two weeks later). It's easier to maintain the logic if we are not overrun with implementation details.

❓ How to Solve Naming Collisions (chapter 3)

We have an Order as write model, and we may have Order in customer account, Order in API, Order send by email, ... How to deal with multiple concepts that naturally have the same name?

I wouldn't recommend using invented names because than it would be difficult to understand the concept. So I'd like to know what Matthias suggests.

I personally tried to distinguish these classes by namespaces, but result is messy. Once I look for a class, I have several occurrences and have to think about namespaces.

A solution that works for me is to prefix read models by the purpose. So I'd have Order - write entity, and read models - CustomerAccountOrder, ApiOrder, EmailOrder. But is it good?

Application services are classes that encapsulate domain use-case, are isolated from infrastructure and belongs to core code. One such service could be OrderEbookService with method order(). The concept makes sense.

I have a problem with the naming.

Instead, I'd like to suggest naming that fits better and is even used later in the book - use-cases.

Matthias suggests to use mocks in tests for external dependencies like Translator.

In this situation when we have an interface, I'd rather use anonymous class (or implementation for tests).

✖ Misinterpretation of Inversion of Control (chapter 5.9)

Matthias says that declaring required constructor arguments is called inversion of control, and we should never use service locator.

The statement is unfortunately wrong, inversion of control != constructor injection.

One of top highlights of the book.

I'd like to extend the statement to "any object". Then the code is easy to understand because it does the job we need, no noise, no unused behavior.

This highlight reminds me frameworks/libraries that forces us to extend from base classes while these base classes have tens of methods. No, please, no.

This chapter starts well - value objects and entities are always valid. Unfortunately the whole chapter feels unfinished, it is for me the weakest chapter in the book.

Matthias suggests constructing value objects in validation layer to catch exceptions and perform validations, and then construct them again in core code for business logic. We can find this code listing 8.11 (chapter 8.3) and it isn't the best and even Matthias isn't satisfied with it. We have to double check inputs - once in the validation layer and once in the core layer. It is double effort for runtime, but also double effort for writing the code that may result in an inconsistency.

Then Matthias recommends that UI shouldn't allow us to make mistakes, and therefore we don't have to write such complicated code anymore.

Matthias suggests to use translatable strings (chapter 8.4) in domain exceptions and translate these string in UI layer to user readable error message. Core code suddenly have an information that is useful only for the UI (not core layer). So we mix layers, and that is a bad idea.

Possible solution is to name the exception class by the reason. This is meaningful in core code - we'll need such information at least in tests, and exception name can be still translated in UI layer.

Logic exception is an error caused by a programmer, like InvalidArgumentException or TypeError. These exceptions should never be caught and translated to user errors because user can't do anything about it.

Runtime exceptions is something that can occur only in runtime, like ValidatorException, UnexpectedValueException or IOException. Users can usually fix problems by themselves so such exceptions should be translated to user readable error message.

We touched this topic in Multiple Validation Errors and we'll combine it with commands.

I have the problem with double creation of value objects.

To solve this problem, I suggest passing value objects to commands. It solves all problems because we create value object only once. Therefore, there is no runtime overhead, and can't lead to inconsistency.

MVC is really not enough for a domain focused application that should last years.

The whole chapter focuses on connecting layers. The only thing that bothers me is connection between UI and Application Service layers. Matthias suggests two solution for this topic.

Create an interface to the application layer with all necessary methods. Eg.:

This solution horrifies me when I imagine how many methods will be there. Not only the amount of methods is problem, also every controller using this interface will use just one (or few) methods, but will always receive all of them.

This solution is bit different. Clean in separation, nice for tests, but we have no idea what the command bus returns or throws. We can do some tricks like assert() but the code doesn't provide information to the reader what is really returns.

Return value could be solved by command handlers that don't return anything.

This works. One problem here could be dealing with generated ID, but this has a solution as well.

The problem with thrown exceptions is still here. We have no idea what exception the handler may throw. I don't have a solution for that.

Testing adapters (eg. repositories) should be done by testing heir public methods only. This idea is beautiful, but may not test enough.

If we test a DoctrineRepository that implements this interface just by the contract, we may end up with the same instance that we've stored.

This is because Doctrine holds entity map, and when we request an object that is already in memory, Doctrine returns it.

This means the test didn't test entities loading at all. So if we forget to map a new property into a database, this test may not discover it.

A test ensuring loading object have to clean the EntityManager.

I solved this issue by contract test that defines abstract method for flushing, and such flushing is defined in a concrete technology test.

This is a new approach for me, and I'm looking to use in next project. Because it has several benefits.

By the way, scenarios tests the core code only, so tests are still fast.

Matthias focuses on communication between programmers and other company members. That's in my opinion the most important aspect to deliver software that has value and lasts.

This is one of the best chapters in the book which also describes where to start with development and how to proceed.

➕ Topics I Miss in the Book

Matthias, thank you for the book, it is great.

The detail review may look like I disagree with lots of things, but it's not true. I wanted to explain why do I disagree and suggest an alternative. I'm open for discussion!

I in fact agree with most of the book, and when I skipped a chapter in the review it means I have nothing to add, I just agree.

Do You want to improve your architecture?. Hire me, I'll help You svatasimara.cz