It would take us 3 full-time months to rewrite this code in 2017. In February 2019 we did it in less than 3-week span with the help of automated tools. Why and how?

This post was originally published in Czech on Zdrojak.cz, where it got huge attention of Czech PHP community and hit amazing 54 comments (a possible record). But when I talk about this migration with my English speaking PHP friends, it seems crazy to them and they want to hear details - who, how, when, what exactly?

This post is for you (and for you of course, if you haven't read it on Zdroják). 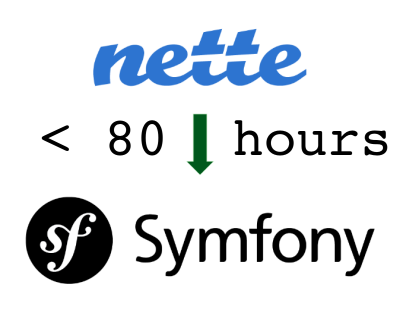 What Have We Migrated?

Backend of Entry.do project - API application built on controllers, routing, Kdyby integrations of Symfony, Doctrine and a few Latte templates. The application has been running in production for last 4 years. We migrated from Nette 2.4 to Symfony 4.2.

The application was written in Nette, which worked and met the technical requirements. The main motivation for the transcription was the dying ecosystem and that over-integration of Symfony. What does "dying ecosystem" mean? Nette released just 1 minor version since July 2016, while Symfony had 6 releases during the same period. 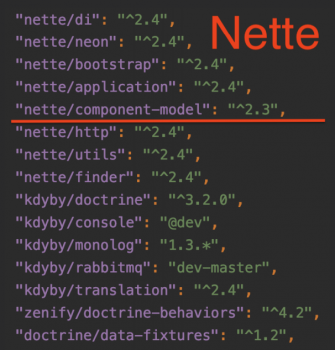 Why use unmaintained integrations of Kdyby and Zenify, that only integrate Symfony to Nette\DI, if Symfony is already there? Last new minor version of Nette was published 3 years ago. Symfony releases new minor version every 6 months with new features will make your work easier.

The final size of migration pull-request

In fact, we were talking about migration at the beginning of 2017, because the Nette ecosystem wasn't really developing and Symfony was technologically skipping it. At that time, however, the transition would last at least 80-90 days for full-time, which is insane, so we didn't go into it.

Although we do not like it, we had to do 20 % of the migration manually.

One of the first steps was to move from config programming to PHP programming. Both frameworks try to promote their own sugar syntax for Neon or YAML. It sounds cool to new programmers, to write less code, but it's confusing, framework-specific, can be done in clear PHP anyway, and most importantly, static analysis and instant refactoring won't deal with it.

What common PHP pattern, that is framework-agnostic and almost everyone knows, can we use?

What did we Gained with This Refactoring?

In Nette and Symfony, several things were different:

Another 80% of the pull-request you saw above was done by automatic tools. The first one was enough to write, the other one to set it up.

Neon and YAML are de facto fields with minor differences in syntax, but when it comes to services, each framework writes a little differently. Config with services had 316 lines in the services section. You don't want to migrate it manually, the Neon entities. In addition, just one error in related migration and you can do it all over again.

I took few hours and wrote Symplify/NeonToYamlConverter. Just pass the path to the *.neon file and it will convert into beautiful *.yaml file.

Again to the factory pattern - there were several custom Response classes in the code that inherited from Nette Response and added extra logic. We could edit them manually one by one, but it was easier to extract them into the factory method:

What else was left?

The most changes were in controllers:

For a while, Kdyby\Translation screwed us with "syntax sugar". In the Nette application, the listing of variables (Tom) worked for us:

But in Symfony magically added %%:

WTF? After 15 minutes we figured it out - Kdyby\Translation wrapped the variable name in "%%" for you - and fixed it:

We also cannot forget the rename of events from Contribute\Events to Symfony KernelEvents:

From RouterFactory to Controller @Route annotation

RouteFactory is single class in Nette to define all routes for all controllers and their actions. In Symfony, this is quite the opposite. You define the routes directly at the Controller action. And to make matters worse it uses annotation.

What with this? Well, one option is to move one route at a time - all 151. To make it even more challenging, we had our own RestRoute and our own RouteList, including POST/GET/..., which Nette doesn't have.

Now do this 151 times... and make rebase-proof. When we first talked about the migration in 2017, we would make all these changes manually. Too lazy to work.

And in 2019? For a few days, we were preparing the nette-to-symfony Rector set and then run it on the entire code base:

Everything we've learned during the 17-day migration is in this set and this post. Just download Rector and you can use the set straight away.

From Valentine's Day to the nette-to-symfony set, a complete migration from Nette Tester to PHPUnit and the migration of Nette Forms to Symfony Forms and Component to Controllers have been added.

After a lot of static content changes, the code worked and the tests went through, but it looked a bit messy. Spaces were missing, fully qualified class names were not imported, etc.

You can use your own PHP_CodeSniffer and PHP-CS-Fixer set. We used the Rector-prepared set of 7 rules with EasyCodingStandard:

It's not about the Work, It's about the Knowledge

And so we migrated a 4-years old Nette application of 54 357 lines under 80 hours to Symfony and put it into production. The most of the time took us debugging of events and writing migration rules and tools. Now the same application would take us (or you) 10 hours top to migrate.

As you can see, any application can be migrate from one framework to another under a month. Dare us!